In the sections on Norman architecture in ‘Carpentry (Tectonics)’, and repeatedly along the rest of the book, Semper refers to the similarities between Nordic and Chinese architecture, contrasting them with the Saxon and Southern European architecture. Both are excellently described and explained in the book. In this edition fifty-seven drawings and photographs are added to Semper’s own engravings —and I am including here some illustrations of works not specifically mentioned by Semper, which were left out of this edition on account of the volume taken by the notes and illustrations of that which he does mention specifically.

First a few images from an extraordinary book which gathers material produced during 1931-46 by the Chinese architect and researcher Liang Ssu-ch’eng, originally published as A pictorial history of Chinese architecture (MIT Press, 1994) and republished by Dover as Chinese architecture: a pictorial history (2005). Liang (1901-72) came from a Beijing family of intellectuals, and was formed as an architect in the Beaux Arts tradition at the University of Pennsylvania Department of Architecture under Paul Cret, around the same time as Louis Kahn (Kahn graduated in 1924, Liang’s first year). I hugely recommend this book.

The next example, remarkable for its architecture, dimensions, and age, is interesting also for understanding aspects of the Greek temples (see for example Garnier’s reconstruction of the temple at Aegina,  included in the appendix to illustrate Semper’s discussion of the Doric temple, or Quatremère de Quincy’s reconstruction of the Temple of Zeus at Olympia, illustrating Semper’s section on Stoffwechsel, the change in material). 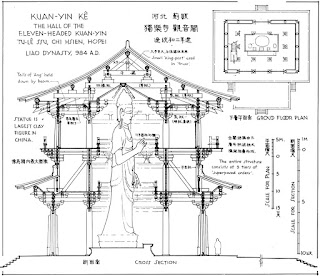 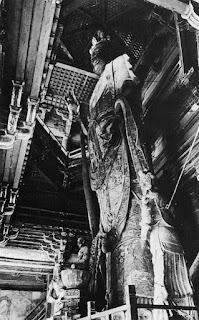 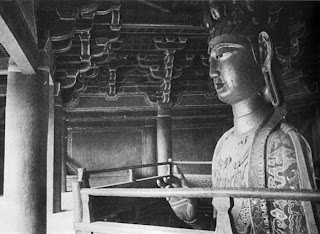 The following picture from Thomas Allom, China in a series of views (1843) immediately recalls Semper’s descriptions of the Scandinavian hall.


The composition of building complexes, from these detached pavilions defined by carpentry bays, is also similar in both architectures. Compare the following drawing with Semper’s description of the Old Norse farmhouse and the monastery plan of St. Gall (here a perspective drawing published by Rahn).

Semper’s remarks, which merge technological, anthropological, and aesthetic considerations, sound particularly rich when compared for example with the much more limited approach to the same subject by Viollet-le-Duc, years later, in his lecture 19 of Entretiens sur l'architecture. Here translated by Benjamin Bucknall.


It must be understood that I am speaking here exclusively of ordinary houses in the country, not of good substantial manorhouses or châteaux whose inmates are agreeably housed. It is ordinary country-houses that I have especially in view, because these are numerous, and the taste for buildings of this kind has been very widely diffused within the last half-century. Yet such is the disorder prevailing in the architectural domain, and such are the odd or puerile fancies of those who build houses, that it is only a very few buildings which fully satisfy the requirements of a country dwelling of moderate dimensions. There are two different ways of meeting these requirements, one of which I shall call the English, and the other the French method. The English method consists in uniting small blocks of buildings, each containing one or two apartments, according to the taste or convenience of the owner — often with a ground-floor only, without any regard to symmetry; each of these blocks being of such a height as suits the apartment it contains, with windows according to the aspect preferred, and communications more or less advantageously contrived. In such a plan as this for a dwelling in the country we see the impress of that practical good sense which distinguishes the English. The French method consists in building a pavilion, that is, a concrete symmetrical block, in which the various services, instead of being scattered as on the English plan, are united in a succession of stories, under the same roof. This is an old traditional method in France, and which has its advantages. The genuine French country-house is the French château de plaisance of the sixteenth century in miniature, as the English “cottage” is the English manor-house of the middle ages in miniature, with its blocks of buildings variously placed according to the convenience of the inhabitant. Some French proprietors have indeed endeavoured to introduce the English style, but I do not think that these dislocated arrangements accord with our habits, unless these should change, which is hardly to be expected. The English method preserves, even amidst relations of close intimacy, a kind of independence, —a personal isolation which is very rarely to be found among ourselves. When Frenchmen find in each other groimds of an intimate friendship, or fancy they do, they seem disposed to have all things in common, and to make an absolute sacrifice of their individualities; though when intimacies too hastily formed give rise to disagreements, the quarrels that result are violent enough. This however is not our worst fault, as it has its good side. But when a family, or even when real friends, assemble, it would seem desirable that their life in common should be as concentrated as possible. The more strictly observed the community of habitation the better. For a Frenchman therefore a country-house is a kind of common tent, whose inmates all observe the same daily custom. Among ourselves, life in a country-house is regarded as lively and agreeable only when all are within reach of each other's voices, when the rooms closely adjoin, and conversation can be carried on through partitions or floorings. It will therefore be very difficult to persuade Frenchmen enjoying a retreat in the country that the best means of keeping up a cordial understanding with each other is none other than the avoidance of this enforced contact at all hours of the day, and the preservation of a fair amount of independence. Of course I do not include exceptional cases. It is the result of our habits of life that the type of a French country-house of modest pretensions, hitherto at any rate, has been, and continues to be, what is called a pavilion. It is for the architect to conform to the established custom, doing his best under the circumstances, without falling into vulgar obsequiousness, and while studying carefully tne real conditions of the progranune as well as those which are concerned with the salubrity and the thorough and easily available means of preserving the dwelling.

For today’s reader Viollet’s description of what he calls “the English method” immediately recalls, in turn, his reader Le Corbusier and the first mode of “les 4 compositions” —the genre plutôt facile, pittoresque, mouvementé, illustrated with Maison La Roche.


Contemporary variations on the Scandinavian carpentry building in César Pelli’s (demolished) Niagara Falls Wintergarden, described in his lecture ‘Environmental Performance’(Crump, Harms, The design connection - Energy and technology in architecture), and more literally in the Sea Ranch units with their primary bays with ample bay windows —complex which brings us back, by way of its authors, students of Kahn, to Paul Cret teacher of Liang Ssu-ch’eng.
Posted by Ignacio Azpiazu at 6:22 AM No comments:

Email ThisBlogThis!Share to TwitterShare to FacebookShare to Pinterest
Labels: all, blog only
Older Posts Home
Subscribe to: Posts (Atom)